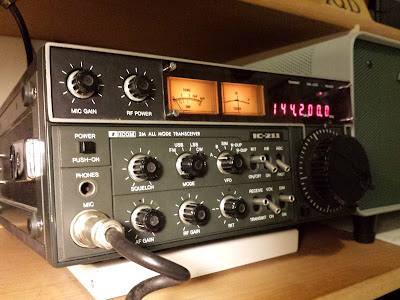 This was another late sleepless night project... Back during this past winter, I accidentally blew the receiver sensitivity out of my old Icom IC-211 2 meter SSB rig while operating on 160 meters at full power. I never turn the IC-211 "off"...maybe a mistake. The 160m antenna is up on the tower at about 100', the 2m SSB antenna is about 15' above that. I've left the 211 on 144.200 for years, no matter what other band or power I was running...but that roll of the dice finally caught up with me. 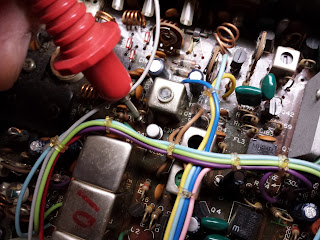 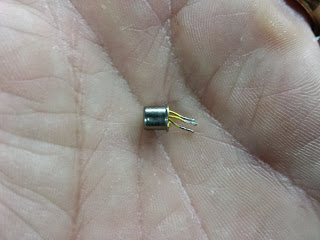 I broke the rig open and started poking around. It had slowly developed a short list of problems, but nothing that stopped it in it's tracks like this blown front end. Using my signal generator, I capacitively coupled a signal on 144.200 mhz into the 1st RF amp stage. I found I had plenty of system gain when the signal was injected at the drain, but almost no gain when injected at the gate. A quick voltage check proved there was almost no current flowing in the device when signal was applied. It seems that the  old 3SK40 dual gate N-channel FET in the 1st RF amp stage that was toasted. 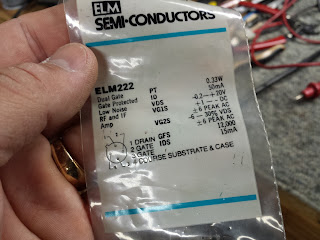 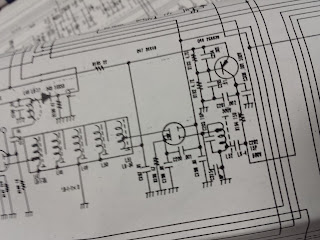 Junk box time!! I dug around in my workshop a bit, to try and locate something suitable from 35+ years ago.. That's an old part from the 70's, but I had 1 piece of ELM222 (similar device) in my parts bin (much to my surprise!).  I removed the old dual gate n-channel FET and soldered it in. I set up the signal generator, opened the service manual PDF, and gave it a full alignment. Wow!! Sensitivity was a little better than before, and I was very surprised as how hot the receiver in this 40 year-old radio is. I have a bunch of service manuals and such online for my own use, to minimize paper, and in case someone else needs them. You can find them at http://207.126.49.184/wb4iuy/radio/wb4iuy6e.htm . 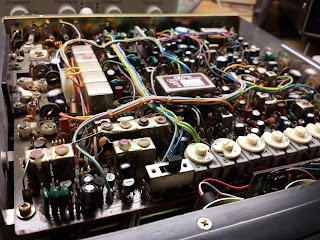 While it was open I replaced the dial lamps, cleaned the optical chopper in the VFO (the VFO operation was a little erratic), and sprayed out the controls. 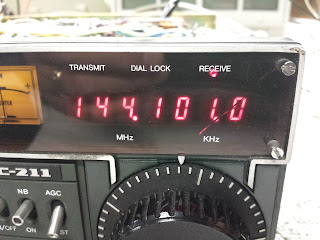 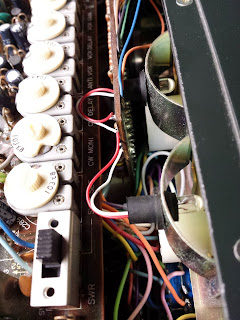 She's back in the shack and VHF contacts like nothing ever happened. It's definitely receiving better than before, and working pretty darn good for a 40 year old radio!