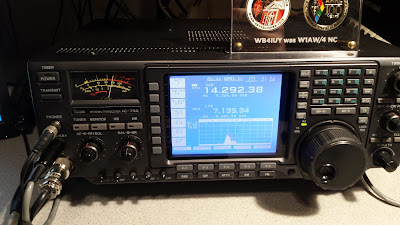 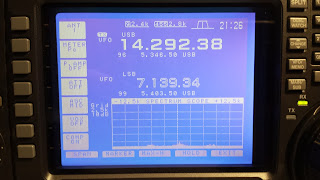 The display has a more brilliant color than this, my phone cam just doesn't do it justice!

This blog is about replacing the LCD display in a Icom IC-756 classic. The displays in these radios haven't been supported by Icom in several years. This is an attempt to archive info & notes from myself and others about different displays used. I'll probably add to / edit this blog as I continue to test & install more displays. If you damage something while trying this, don't blame me...these are only notes I've posted from several installations I've done, and feedback from others who have done the same.

Winstar WG320240D-TMI-TZ# display: When installing this model, I had tried to drive the display contrast input (display pin 13) from the 756 contrast output (DV0, radio pin 1). It works, but over the period of an hour or so, one has to go into the radio menu and readjust the contrast setting. It seemed to be a thermal drift of some sort in that circuit. After working with the mfg, I discovered a few things:

1- The display generates it's own -25vdc and outputs it to pin display 12. The -30vdc from the radio pin 2 should not be connected to the display. The display is temperature compensated and it varies the -25vdc output at display pin 12 accordingly.

2- When driving display pin 13 from the radio, it ignores the display's temp compensation, thus causing the contrast "drift" or instability. Installing a linear potentiometer of 15k, high side to pin 12, low side to pin 14, and wiper to pin 13 allows the display contrast input to reference the temperature compensated internal -25vdc supply of the display, and I've found the contrast to be perfectly stable. Keep the pot as close to the display as possible, leads short...

3- I prefer to have the contrast adjustment where it can be easily reached, as contrast is somewhat subjective and based partially on the viewing angle. An internal pot is fine, but I like to be able to adjust it easily. I found the lower LH side of the cabinet (just below the handle) to be a good, easy-to-reach location for this. When mounting the pot somewhere that requires a few inches of wire to make the connection, install a 100pf capacitor across the high and low connections to the pot. The -25vdc output of the display acts like a nice antenna to radiate processor noise to the rest of your rig, and I found 100pf seems to be adequate to resolve the issue. 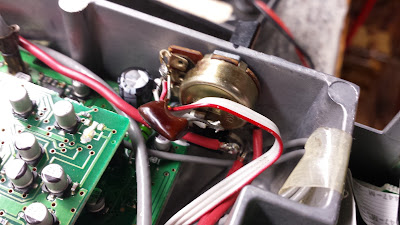 100pf cap across high and low terminals of the remote contrast pot I installed in this radio...


4- Source a +12vdc switched point to build the 5vdc regulator for the LED back light. I use the point from the 4-pin rear panel  accessory port. Use a 7805 regulator and heat sink to chassis, and a 33 ohm 1/2 watt resistor in series with the output to the back light, to limit the backlight current. Open coil L103 along side of the HV compartment to shut the CCFL HV supply off when using displays with LED back lights.


Stanley GMF32024ABTW1X: The Stanley display found by Rick K4PQ is by far the easiest to install electrically (no back light mods required and seems to be temp compensated in some other way) . This has been the easiest display to install to date, but availability seems to now be an issue...

1- Contrast setting is very stable, the current requirement at display pin 13 is only a few MA (contributing to stability).  Connect the -30vdc supply from the radio to display pin 12 via 2k 1/2 watt resistor. Be sure to turn the trimmer down on the sub-logic board to about the 9 O'Clock position.


2- The back light is directly driven from the radio CCFL HV supply with no mods. This is not a polarized connection and polarity is not important. No back light supply mods needed!

Can anyone find another source of the Stanley display GMF32024ABTW1X ??

*** Update*** Another person bought a New Haven NHD-320240WG-ATMI-TZ# display, and it was MUCH too wide. Avoid that model. Try to choose displays that have a max board width of around 142mm wide and 96mm tall (although board height isn't as critical)

Folks have physically installed these various displays in the metal sub-chassis a number of ways from building brackets, re-drilling holes, etc. I prefer the Hot glue method recommended by Rick K4PQ...quick, easy, and very solid. 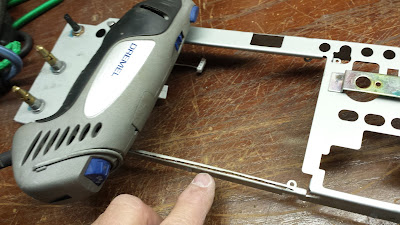 I use the Dremel tool to remove the little folded edge from the sub-chassis for best fitment...

When disassembling the face of the radio from the sub-chassis, I've found cutting small cardboard tabs and inserting under the clips around the perimeter makes removal much easier. 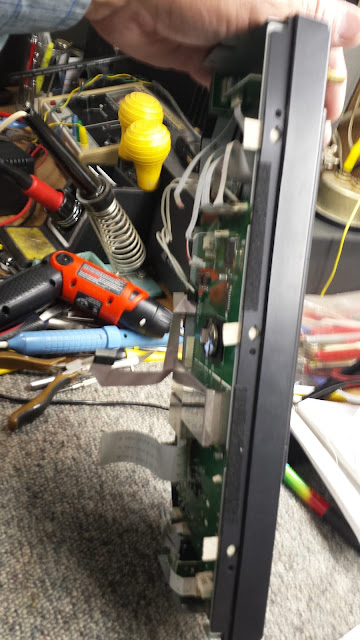 Using the original display as a donor, cut the plug for the ribbon cable and a piece of the board away, and stick it to the new board with thick double-side tape as a sort of "break-out" board to help with assembly. The numbers are backwards on the cut-away board from the actual ribbon cable and socket on the radio main board...makes no sense, but the cross reference chart takes this into consideration. Mark the ribbon cable TOP surfaces and make sure to not get the cable reversed during re-assembly. 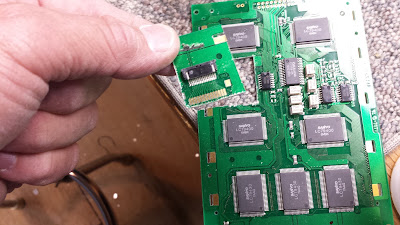 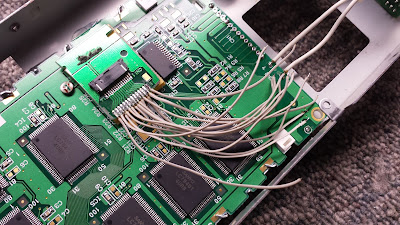 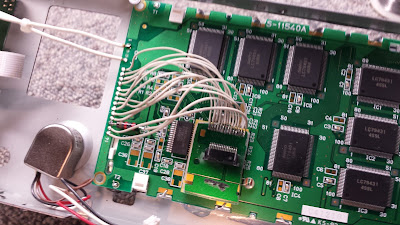 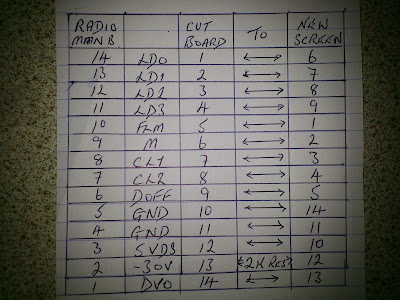 Cross ref for the Winstar Display

When removing the front panel from the sub-chassis, slip the rubber cover off of the main VFO knob, loosen the set screw found below it, and remove the long silver screw from the VFO brake. 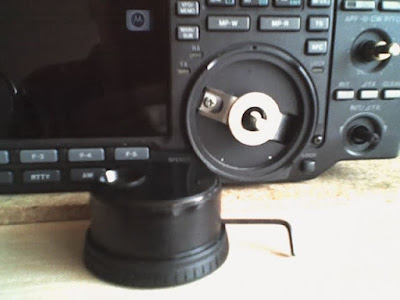 When removing the sub-logic board, be sure to unsolder the S-Meter connections to allow the boards to separate.

Another model successfully fitted and installed was purchased from aliexpress.com as Yuxian model #
LG3202404BMDWH6N . It was fitted and worked fine. It's board dimensions measure 139mm wide x 106mm tall.

The board pinout labels seem to be reversed fro the latch and shift pulse. The corrected pinout conversion from the cut board outlined above (cut piece from oem display) to the radio is:

** If the display has internal temperature comp, I've found that leaving the connection open between pin 13 on the cut board and the -Vout (pin 8 on your new display) yields much better contrast stability as the display warms up.

- Researching a Yuxian SP14N002 CCFL now, the CCFL backlight would make for an easier installation and use the OEM CCFL backlight driver. More on this later...