I'm moving along, slowly but surely... With winter moving in, I'm trying to get some antennas up and tuned, to hold me through the winter months. I'm laying them out with the ability to move them up to a higher perch, once the rest of my tower sections are stacked and readied in the spring.

Today, I had a little time before sunset and installed another antenna onto the center insulator I built a few blogs back. The way the side arm / current choke / center insulator are built, it's easy to add more antennas to the same feed point and feed line. I cut a new dipole to be resonant at about 7.050mhz, pulled it up the tower to the 65' point, connected it to the same feed point as the 80m inverted V, attached insulators to the far ends of the wire, and pulled it out to new anchor points that were basically north & south. The makes the antenna radiate a little more to the east & west, but being an inverted V, it is somewhat omni-directional anyway.

It worked out great, and didn't impact the operation of the 80m CW inverted V previously installed. Another added bonus, in addition to automatic band switching between 80 & 40 meters, is where the antenna is accidentally resonant across the 17M band. It's probably some unknown quirk where the current choke and length of feedline is hiding reflected power, but I don't care... the rig is happy, and it's working great on 17 meters to boot.

I've already worked in to the Czech Republic and Western Sahara with only 100 watts, and am thrilled! The match looks good, and the amp is very happy (for a change). It's time to grab a cold 807, put the headphones on, and get into some DXing! Here's a few pics...

The new 40m CW antenna seen from the south side of the tower. The 40m wire is the wire going towards the top of the pic with the insulator about 1/2 way out. The 80m wire is just above it... 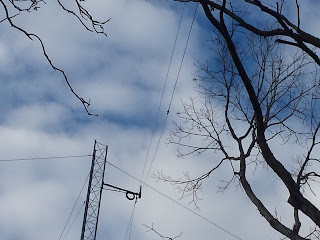 The 40m CW antenna seen from the north side of the tower. You can see the 40m wire with the insulator in the upper center of the photo. The 80m antenna is almost invisible, just below and to the left of the 40m wire. 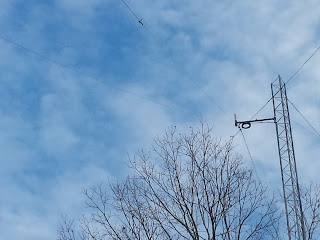 Another pic of the antenna & tower, looking up the 40m CW antenna north leg. Can't wait to get the rest of the tower stacked up there! 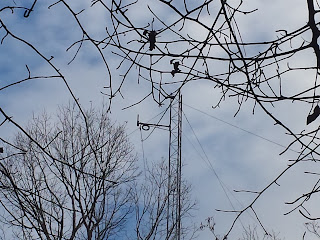 I anchor my dipoles with "Para-Cord fro Walmart. Very inexpensive, strong, and is UV protected. This is about $3 for a 50' pack. It's easily joined if you need it longer, and it doesn't abreaid from tree limbes rubbing against it like the masonry cord I've used since the 70's. It's available in several colors, but I like this color as it blends in with the trees nicely. 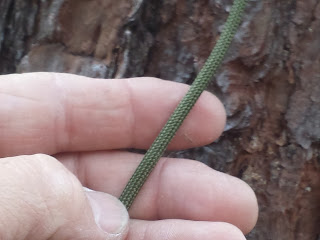 I drive a couple of 16P nails in the tree, splay them out slightly from one another, and use it to attach the paracord and wind the excess. It's easy to unwind when I want to drop an antenna for work. 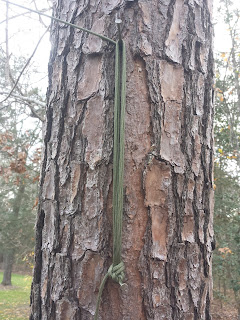 I ran a few tests and the new 40m CW antenna addition also tunes up on 15m (as it should) nicely, can't wait for the band to open tomorrow and give it a test.