After finishing up a bit of Christmas shopping on Monday, there was time before dark to get the 3rd antenna up at about 70' in the group of HF dipoles I'm pulling up on my tower. These are being installed in a way that will allow for moving to a higher location in the future, as the tower work continues through the winter. Since winter caught up with me, I decided to get some low band stuff up, and will continue with the tower work as weather permits. All of these are fed with a common feed line, making expansion pretty easy. You can see the center insulator / feed point design a few blogs back. So far, this provides operation on 160m, 80m, and 40m (bottom end of all bands for CW operation) without a tuner. The 40m antenna also resonates on 15m nicely with a decent match.

There's a separate sloper up at about the same height on 30 meters. I worked the Gambia tonight on 30m with my fan dipole and got a 559 report... I couldn't even hear them on the resonant 30m sloper, but then it is facing southwest. Anyway, here's a few pics... 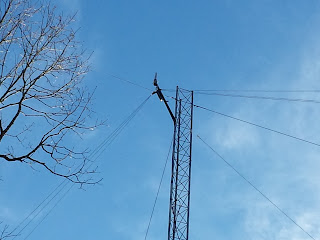 Here's a "zoomed out" picture from pretty much the same location. This puts the height somewhat more in perspective. 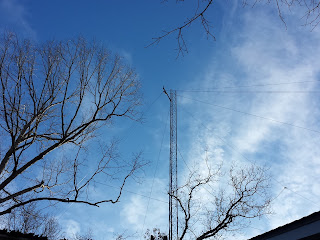 Adding the 160 meter antenna proved to be a bit more difficult. Since the tower is only 70' tall thus far, and the 160 m antenna is about 129' long on each side (!!! almost 260' of wire!), I had to get more creative then int he previous installation. My property is heavily wooded, so finding a clearing in the direction I wanted was tough. I intentionally wanted to install these antennas with the wires being north / south, so the strongest pattern would be east / west. To the north and south, the woods begin only about 70 away from the tower, meaning that I would only use up about 100' of wire before Id be in the trees. Wanting to keep it in an inverted V configuration (more omnidirectional), I attached an insulator to a tree in the edge of the woods at about 15' up, passed the antenna through the insulator, and tied it off to another tree about 30' away at about 15' up. When viewed from above, it would look like a mild "Z" shape. Here's a pic of the "feed-thru" insulator on the north side... 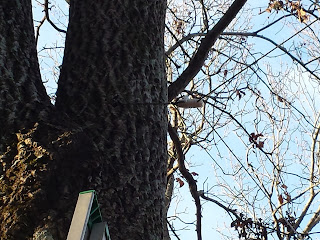 Here's a shot of the "feed-thru" insulator on the south side. I used my tree-trimmer to clear a path through the vines and undergrowth, to give the antenna lead to stay free of things that might impact tuning. 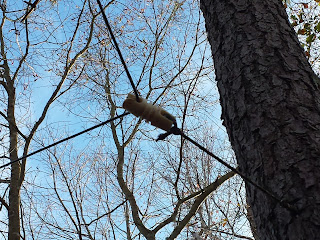 In the center of the last photo, you'll see one of the white terminating insulators that attaches the whole lash up to a tree about 35' into the woods. one would thing this would be difficult to tune, but it wasn't. I cut the antenna length with the typical formula of 468 / Fmhz, and it worked out pretty close. The antennas are all built from 12 ga stranded THHN insulated single conductor wire. I find the insulation really helps with rain and snow static, as well as discharge noise on windy days. 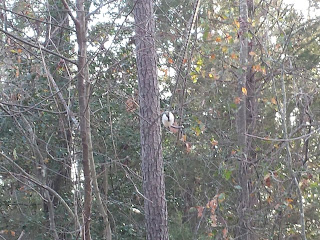 After a brief test tonight, I got a signal report of 599 from KP4TF in Puerto Rico, a 559 from  SM5EDX in Sweden, and a 559 from 4O/KC0W in Montenegro. Nothing earth shattering, but I'm back on 160 meters for the winter. Once the tower is finished, I'll get it pulled up to about 130' at the apex, and it should play fine from there. To previous 160 V was up at 105', and it did great, working into Africa, Australia, New Zealand, etc.