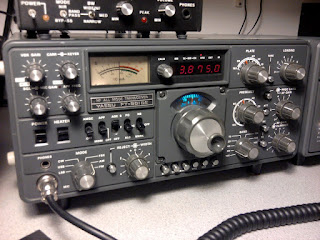 After looking at my old Yaesu FT-901 in Studio "A" with a failed transmitter for several months, I decided to dig into it this past rainy Sunday and see what had gone wrong with it. I checked the usual things... the 6146's and 12BY7 tubes, bias, operating voltages in the RF cage, etc. All was normal. It was actually producing about 100mw, and all was loading up OK, she just wasn't pulling any plate current above idle, as if there was no drive. I broke out the scope and started poking around a little, and discovered the TX output from the RF board to be waaayyyyyy down. After some voltage drop checks, it looked as if one of the 3SK40L's N-Channel mosfets had failed. 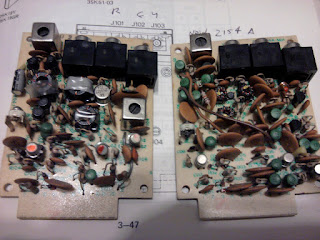 I scrounged around in my Yaesu spare (junk) parts box, and found an RF board from a later model. Mine used the PB-1702, and I had a PB-2154A from a later (newer) model. You can see the two boards compared above, and the component layout (and overall design) to be very different. I compared the pinout on the edge connector between the two in my shop manual, and that seemed to be the same. The old board used two FETs in the mixer, the newer boards uses a diode ring mixer. I started to pull a FET from the new board, but a bit more reading on foxtango.org suggested the newer board would work and was an IMD improvement. 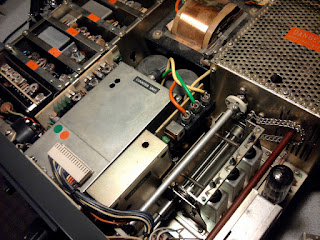 On the left, you can see the new version RF board plugged in for a test, with the red, yellow, and green cables plugged into the top. I plugged the new board in, flipped the switch for a smoke test, and she came alive with full output. Yipee!! All is well, and my old FT-901DE is back on the air with a newer version RF board to boot. Ya gotta love these old rigs for ease of service. My rig is one of the early serial #'s, produced sometime around 1978. Despite it's age, it was one of Yaesu's flagship contest rigs of the day, and still preforms pretty darn good today.