Boy, this project is really dragging out.... this is the tower seen in previous blogs, that was torn up back in April of 2016 in a storm. It's now the end of November, and I'm just beginning to install some temporary antennas. I expected to be finished with the tower by now but work, storm damage repairs to our home, and remodelling of our home took priority. I've been operating with only a 30m sloper at about 68' on the west side of the tower, but it's a pitiful performer on other bands. On the bright side, I'm almost at DXCC on 30m, a band I almost never worked before :-)

A photo of the side arm, current choke, and low-end 80m Inverted V installed at about 65' on the east side of my tower. You can click on any of these photos for a larger view... 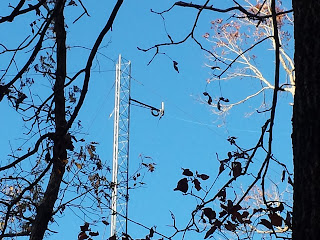 The tower is currently at about 70', and I have another 50' to install. Since it's late November, I realize the total rebuild likely won't happen before spring. With the winter months being the time I operate most, I decided I needed to get busy with some antennas. The antennas I install will be done with extra feedline included and built in a in a way that will allow me to simply cut the tape securing the coax and raise the mount once the remaining tower is installed.


A photo of the insulator used on the low end of the south leg of the next low-end 80m Inverted V. 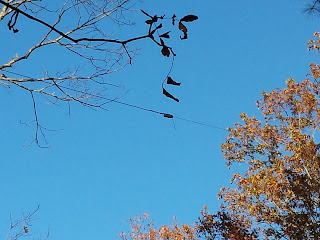 This is the first of these antennas. I cut an inverted V for 3.550 mhz , to allow operation from about 3.500 mhz to 3.600 mhz at QRO without a tuner. The two wires were cut to 67'2", and this allows 9" for attachment to the strain relief at the feed point, and 6" for wrapping at the insulator. The tower side arm & current choke assembly from the previous blog was installed at about 65' up on the east side of the tower. It included a mount for a vertical antenna, but I haven't decided on that, yet. I attached the inverted V to the dipole feed point installed on the arm, with the antenna pulled north-south. While an inverted V is mostly omni-directional, this will allow for the lobes of strongest radiation to be east & west. The feedpoint was designed and fabricated to allow multiple dipoles to be attached, and more be added soon.

A photo looking up the south leg of the low-end 80m Inverted V antennas. Since the far ends are anchored to trees, I always leave a bit of sag in the wires. 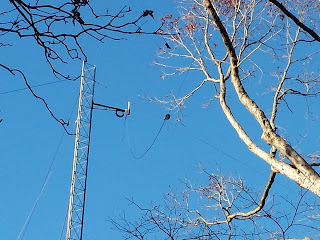 
A look up the tower, the side arm and 80m Inverted V is seen on the RH side of the tower in this picture. 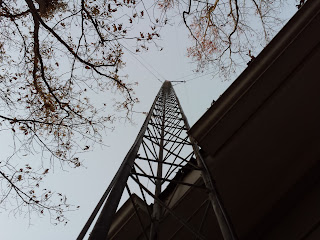